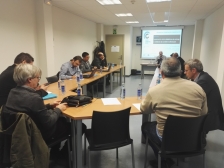 Companies from the audiovisual and ICT sectors participated during the months of October and November, in Santiago, in the Digitalization Industry 4.0 Workshops, organized by the Galician Audiovisual Cluster in collaboration with the ICT Cluster Galicia and with the support of Igape, with the objective of To promote projects around three topics of interest to the sector: Implementation of a platform for delivery and validation of audiovisual content, Sectoral adaptation of an ERP for the audiovisual sector and Creation of contents in Virtual Reality with interactive capacity to be applied in educational environments.

During these workshops, which were framed within the Program of Digitization Workshops Industry 4.0 that promotes and co-funds the Igape, with the Xunta de Galicia and FEDER funds, the exchange of knowledge and experiences among agents of the sector for the identification of common needs was fostered and ideas were contributed to facilitate the implementation of future projects in the field of the areas that approached the workshops.
They involved audiovisual companies such as Aba Films, Ancora Films, Adiviña Producións, Cinfo, CTV, Fiction Productions, Mondotropo, Setemedia or Voz Audiovisual. In addition to potential customers and potential technology providers with which to launch these initiatives, such as Abinco, Anubia, Enxendra, Indra, Netex, Ilux Visual Technologies or Torusware, among others. Highlighting the collaboration of Igape itself, through José Manuel Fernández, manager of Igape IP, and Fany Suárez, technical responsible for Programs; of the CRTVG, through the director of the Innovation and Business Area, José Pereira, or the representatives of Amtega and the Dico Challenge project of R.