Open call for projects for the 14th edition of "I + P, Ideas to Produce" 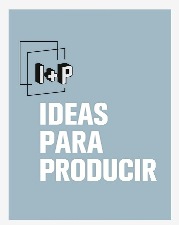 Until October 6, the deadline is open for registering audiovisual projects in the 14th edition of the pitching "I + P, Ideas to produce", to be held on November 24 and 25 in Pontevedra. The Galician Audiovisual Cluster will guarantee the personal protection and social distance measures against the Covid-19.

The "I + P, Ideas to Produce" aims to bring together producers, screenwriters and directors who have a film or television project, and who seek business alliances for their co-production, sale or distribution, with managers of television channels and platforms, executive producers, distributors and international sales managers.

Among all the works received, a committee of experts will select 15 film and television projects to carry out, on November 25, a pitch in front of prominent audiovisual agents. Then one to one meetings will be held between the producers and creators of the works and the experts who attend Pitching this year.

In the event that the moment the existing conditions do not allow the pitching to be done in person, the Galician Audiovisual Cluster will hold an online edition of "I + P, Ideas to Produce" on the same dates and will inform everyone of this change. participants.

Producers and creators interested in participating in this new edition of I + P can register their work until October 6 by sending the registration form to comunicacion@clag.es. The Cluster will communicate the selected projects starting on October 30.

In its 14th edition, the “I + P, Ideas to Produce” has the support of the Xunta de Galicia, through the Axencia Galega das Industrias Culturais (AGADIC) and the Galician Institute for Economic Promotion (Igape), and the City Council from Pontevedra. With the sponsorship of Gadisa and Music Library & SFX, and the collaboration of the CREA and AGAG associations, the Filmarket Hub platform and the Pontevedra Film Commission.

This year, in addition to the Galician Association of Professionals of Direction and Production (CREA), the Galician Union of Writers Association (AGAG) also collaborates with the "I + P, Ideas to Produce". These collaborations aim to promote the participation of CREA and AGAG members in pitching with preferential conditions.

Thus, the project of the members of both associations best valued by the Selection Committee among all those registered in the "I + P, Ideas to Produce" will have direct access to the conference, enjoying the same discount as the members of the Galician Audiovisual Cluster . If there are more projects from CREA and AGAG members selected to participate in the conference, the general conditions will apply to these.

As a novelty in this edition, companies associated with any of the audiovisual clusters in Spain, and not only those in the Galician Audiovisual Cluster, will also enjoy special discounts for "I + P, Ideas to Produce".

The Filmarket Hub online platform continues to support “I + P, Ideas to Produce”. So the feature films and series selected to participate in the 14th edition of the forum will be included in the Filmarket Hub catalog and will enjoy one year of free registration in the online market that operates on the European continent and in Latin America. In this way, the projects will have another year of greater visibility and dissemination, increasing their chances of finding potential co-producers or buyers and being able to access other companies in addition to those that participate in the pitching.