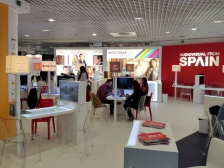 The Galician Audiovisual Cluster, with various of its associated companies such as Portocabo, CRTVG, CTV, Tamboura, Ficción Producciones or Zenit Televisión, are part of the representation of the Galician audiovisual in the thirtieth edition of MIPCOM. The meeting point of the Galician commercial and institutional delegation is the space of the Films from Galicia brand, promoted by the Xunta, through Agadic. This space is part of one of the twenty exhibitors of the Spanish pavilion Audiovisual from Spain, organized by ICEX Spain Exports and Investments, an umbrella that includes some 50 Spanish companies.

MIPCOM which takes place in the city of Cannes from 14 to 17 October, has become the most eagerly awaited market in the audiovisual world, where more than 13,800 professionals from the audiovisual industry come together to turn every moment into an opportunity.

The Cluster supports its associated companies through the development of various actions to promote the Galician audiovisual industry at an international level, carrying out networking activities, the development of its own commercial agenda for the sale of audiovisual products of its associated companies or other promotional actions such as screenings.

These actions are being carried out within the framework of aid for the implementation of joint external promotion actions of Galician companies (Galicia Exporta Organismos Intermedios) granted through the Igape (Galician Institute for Economic Promotion) and co-financed by the European Regional Development Fund, within the framework of the Feder Galicia 2014-2020 operational programme.