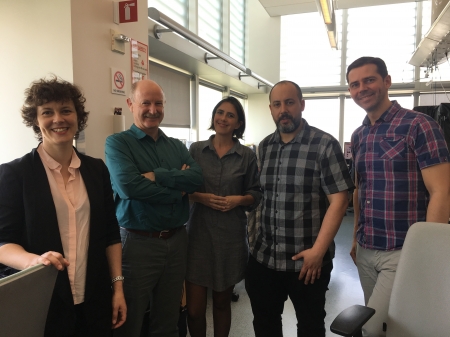 In the future, new neurotechnologies will emerge that will allow us to communicate through the mind with computers or control robots and avatars with our thinking, advances that will enable us to incement our capacities and that will profoundly transform society. This panorama will be collected in the documentary "Mind forward" ("The future of the mind"), led by the Galician production companies Agallas Films and Somadrone, and whose filming has just started in New York.

"Mind forward" was presented in the 2016 edition of our pitching "I + P Ideas to produce" and is the only Spanish project that last year got the support of the MEDIA Development aid. It also has the participation of AGADIC, TVG, ICAA and the Portuguese ICA.

Filming has just started in New York with Ruth Chao in the direction and Alphonse de la Puente in the script, in addition to Santiago Raimundi as director of photography. In the city of skyscrapers have just interviewed the Spanish Rafael Yuste, one of the most important figures in the world of neuroscience, the man who convinced Obama that we had to return to the era of big science (great science).

Boston, San Francisco and Los Angeles are other locations in the USA. in addition to Lisbon, Berlin or Lausanne in which the figures that are in charge of enormous scientific projects will be interviewed and various experiments will be recorded, from cars controlled by the mind, to a neurotechnology that combines Virtual Reality with brain-machine communication to improve safety on the road, or the "neural-dust", some nanochips that are inserted into the body and help control movements in people who can not perform them or the "headset", a type of helmets-diadems with electrodes that allow control objects with the mind.

For Somadrome , a producer specialized in scientific documentaries to sell internationally, this is its most ambitious project. His previous documentaries had excellent results on France5, Discovery Channel, Aljazeera, N24, Movistar Plus or TVE, among many other world channels.

Agallas Films < / a> Mestre Mateo has just won the best documentary with "A batalla descoñecida", premiered at the Seminci, produced for TVE, and that will arrive at the NUMAX cinemas next May 25th. They also produced the film "Lobos Sucios", a co-production with Belgium and premiered worldwide at the North American Mill Valley festival.